I use Artix Linux with OpenRC and the XFCE desktop environment. It gives me the appeal of Arch, mainly pacman and the AUR without being dependent on Red Hat's unreasonable and monopolistic software. That is really the only reason, distro doesn't tend to matter beyond small things like that.

Distro aside, the reason I use linux in general is so I can use software which meets my needs precisely and efficiently and doesn't demand that I give it my email, phone number, or anything stupid like that. I think that software should just do what it is designed to do without any extra nonsense like telemetry, features which don't relate to the program's core purpose, or resource intensive flashy visuals. The general design philosophy of Linux aligns with my software preferences more than anything else, which isn't saying much but I'll take what I can get considering the absolute state of software right now.

On top of having a relatively competent design philosophy, a good linux setup will respect user privacy completely. Having privacy respecting software is important since there is so much uncertainty about how much big tech knows about you, and about what they can do with that information. 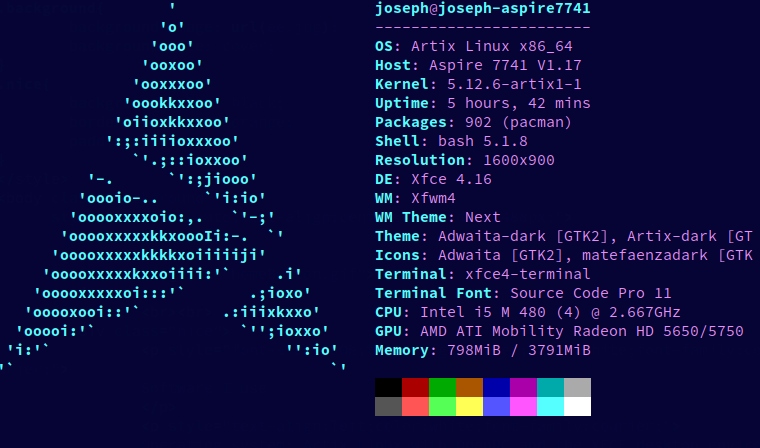 It's simple when you need simplicity and powerful when you need complex and specific features to speed up your workflow. It's the ideal text editing experience.

Qutebrowser achieves what I think is the optimal balance for usability and minimalism on the modern web. Its not so minimal that sites become unusable but its minimal enough to run fine (but not great, thanks python) with minimal visual clutter. This may be specific to my use case since I don't use sites that require advanced adblocking or other complicated features that qutebrowser doesn't have. I use a keybind to open videos in mpv, instead of watching them in the browser itself. This gives me mpv's powerful adblocking and lets me play videos in a video player that works far better than any site's built in player. The keyboard controls are helpful for use on my laptop, which has a terrible trackpad experience.

LibreWolf is for the few circumstances where qutebrowser just can't do the job. It's a modified version of firefox that's privacy focused.

If you're on windows, good luck, neither of these browsers work very well there, yet.

On my phone I use bromite, a fork of google's chromium with enhanced privacy and ad blocking. It is probably the best mobile browser no matter your tastes.

Mpv is a simple but powerful media player with a minimal GUI. It launches extremely quickly compared to other media players like VLC, which makes it great for situations where your media player may open and close repeatedly, such as browsing your meme folder.

It offers hotkeys for features which are often very useful to have at your fingertips. Q closes it, F fullscreens, V toggles subtitles, CTRL+ and CTRL- can manually sync up desynced audio, [ and ] will adjust playback speed, and number row can adjust colors, brightness, and volume. Theres even more but those are the hotkeys that I use.

It has powerful adblocking for playing online videos as well, you can watch anything from a livestream to a bitchute video through it.

There is very little reason to use any other media player, mpv outclasses everything else in both speed and functionality, the only issue I've had is that it is difficult to manually add subtitles to a video, in VLC this is drag and drop but in mpv it is needlessly complicated.

If you want a version with additions to accomodate GUI fans then use mpv.net which isn't a website but is named like one for some reason. 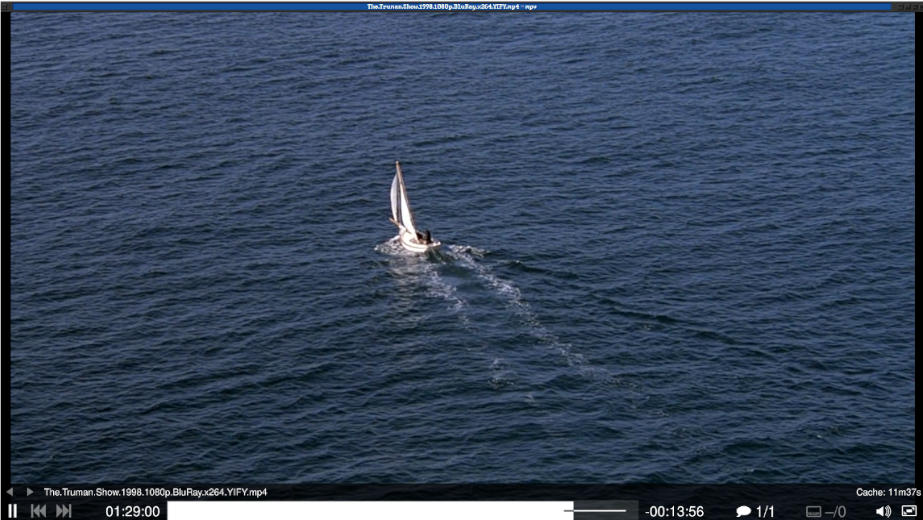 I use RSS to avoid subscribing to youtube accounts through the youtube site, which is designed at every level to guide you into a loop of watching time wasting and low quality videos that burn out your attention span. Using RSS you can ensure that you are only fed videos from high quality channels that deserve your time (plus youtube won't be able to farm advertising data from you). A macro in newsboat allows me to open videos in mpv, so I never even see the youtube site.

On top of fixing the youtube experience, RSS lets me put other things like blogs, twitter accounts, bitchute channels, etc into the same feed as my youtube subscriptions, so I don't need to hop all around the internet to see the things I want to see. This a large part of how I get away with using a very minimalist web browser, lots of tasks you might use a complicated web browser for are handled here. I launch newsboat with the alias "n". 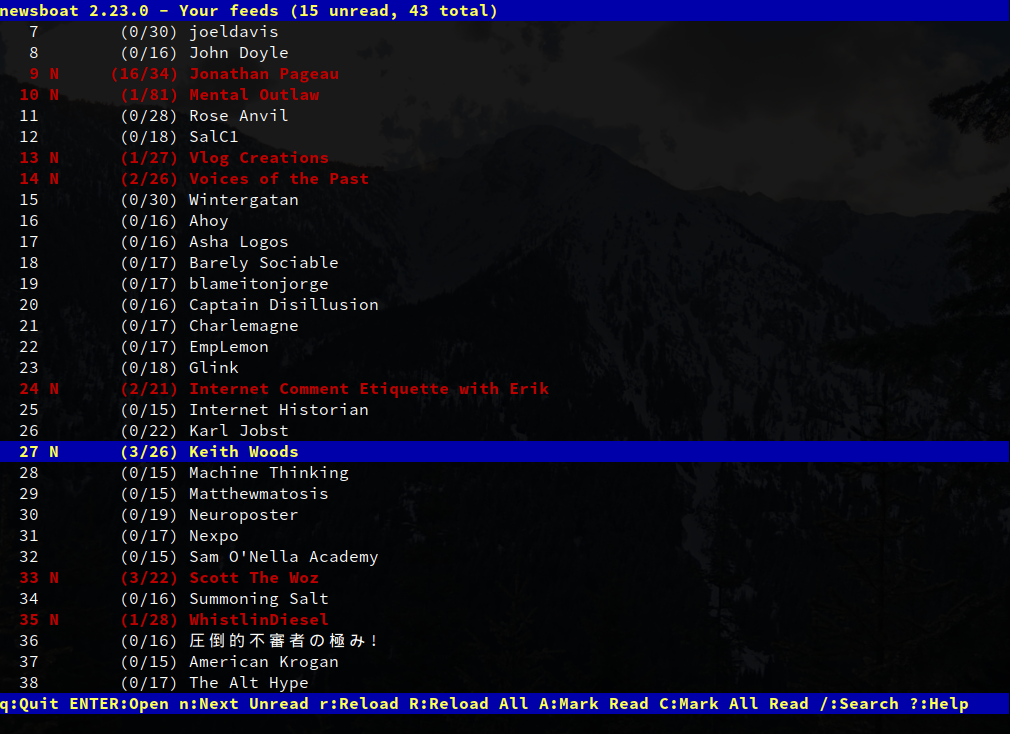 A simple and customizable terminal file manager which has efficient hotkeys and plenty of useful features, it can even show image thumbnails in the terminal (GNOME file picker in absolute shambles). LF is a similar program to consider which uses fewer resources because it isnt written in python, but it does have less features. Ranger runs well enough for me to favor it over LF for the features. I launch it with the alias "r" to speed things up.

Sxiv is a simple, minimalist image viewer which launches almost instantly and uses efficient hotkeys for navigation and image manipulation. I use it purely because it is so fast, it feels good to open an image and have it immediately appear in front of you with no fancy animation or wait time.

yt-dlp is a simple command line video downloader which is easily scriptable. It is substituting youtube-dl for the moment. Install it and yt-dlp-drop-in from the AUR to make programs like mpv default to using it instead of youtube-dl.

ffmpeg is an extremely powerful command line video conversion tool. It is challenging to learn but it can convert just about anything. You can turn an mp4 into a gif, use it to compress a video to fit within filesize limits, use it to crop, trim, resize, combine a video with audio, or do really anything. I recommend looking up commands for the jobs you have in mind then saving them in a text file for future use, then you can just copy and paste without having to learn too much.

Unfortunately discord is difficult to avoid for zoomers like myself. I would suggest using mumble, teamspeak or matrix first, but if you must use discord then ripcord improves the experience greatly and gives you great customization options. It isn't based on a web browser so it runs way more efficiently. It doesn't have a built in video player, so I use a macro key to open videos in mpv instead. 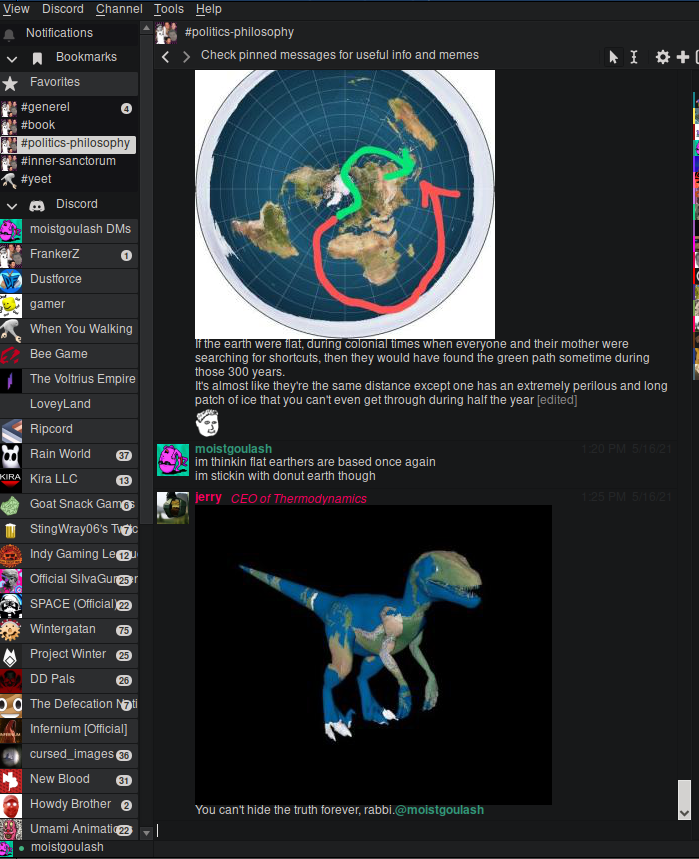 Misc things I use but that don't change my computing experience very much so I won't write a fancy paragraph about them: 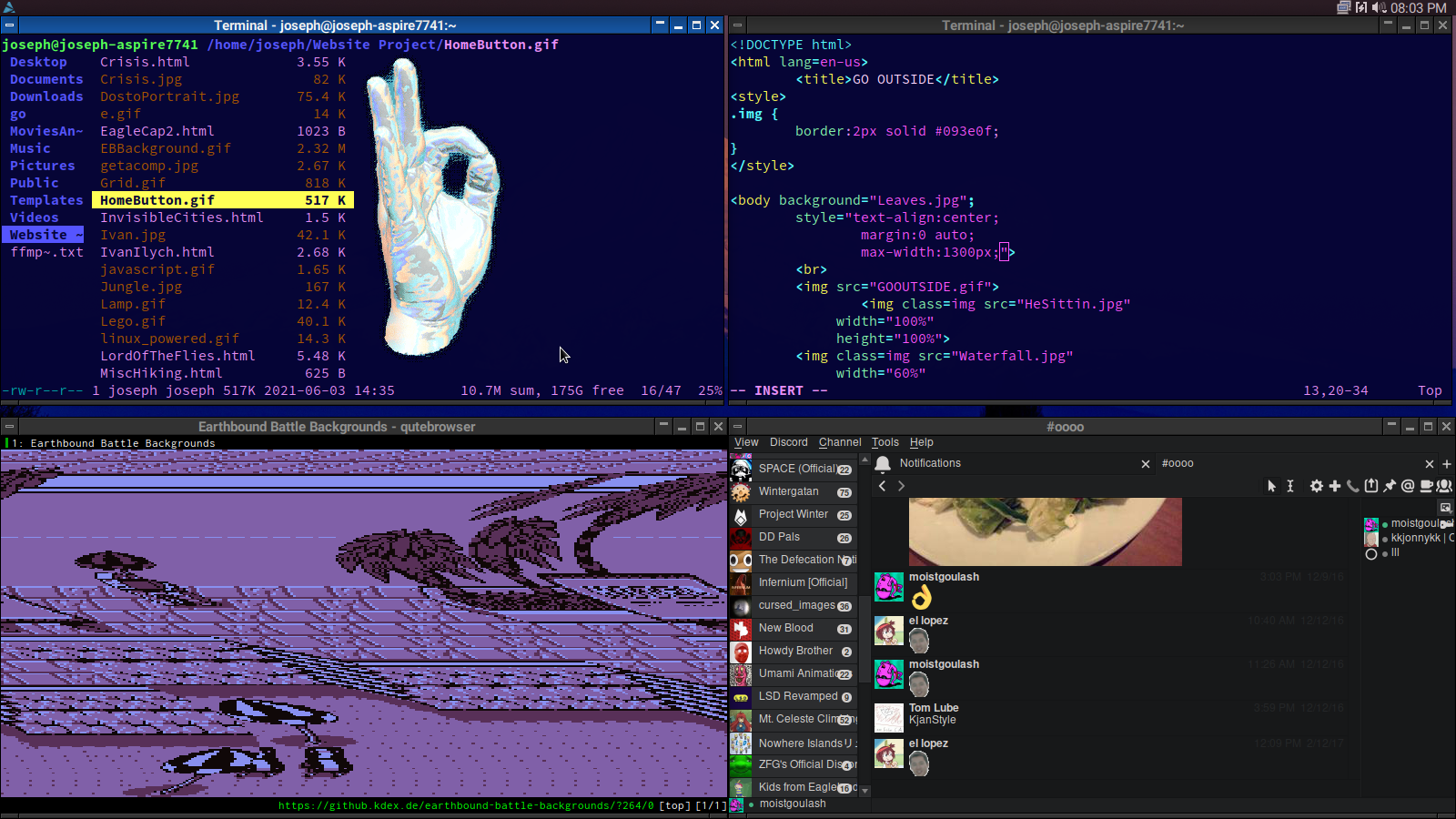 Obligatory super cool looking screenshot of my desktop that makes me look like I know what I'm doing.

Part of the beauty of linux is that independent programs can be made to cooperate and interact to produce a very specific result to satisfy the user. In this janky script ffmpeg and yt-dlp are used to download a video from a URL, convert it to the format and size the user requests then open the file's location in the default file explorer. This is very useful for someone like me who listens to a lot of mp3s and posts a lot of webms on mongolian basket weaving forums. Copy and paste this into a .sh file and make it executable with chmod +x, then run it with ./[FILENAME]